Missed bus. Full train. No internet. Long calls to a friend, so he would get me a new bus ticket.

This is how my first journey to Germany started. I was feeling a little down after all of these problems, but luckily in Helsinki I was hosted by a lovely fellow ESNer from Uni Helsinki, who let me into her apartment from the freezing Finnish winter. ESN love is just everywhere!

I’d never been in Germany before, so I was more than excited to go there for NP Jena. However, I was prepared – I had taken two courses of German and was about to take a third one, so one more language of ridiculously long words wasn’t that big of a surprise for me. The invitation to this NP was all about the ESN spirit and ESN love! Do you remember that hug-lover Benni, who joined us at the NP Helsinki in the autumn of 2015? It was him who was so extremely nice (and convincing) during the sign-up period, that I just couldn’t refuse coming. 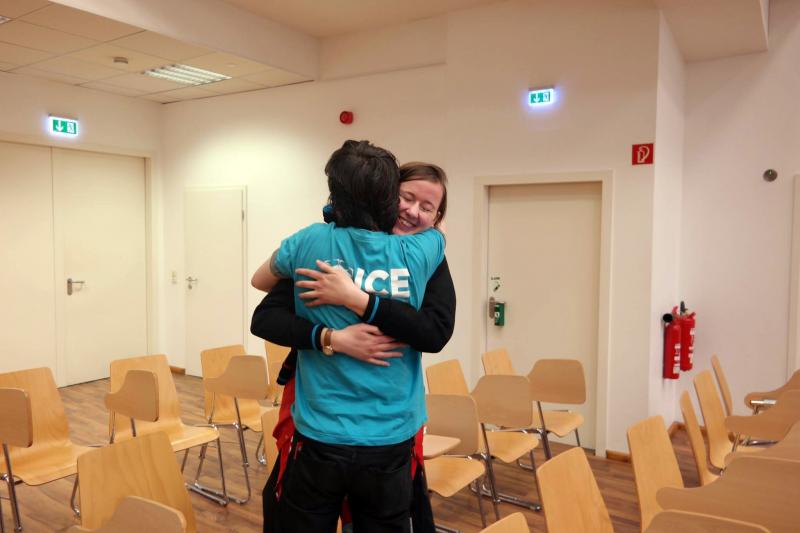 When looking for the transportation in Germany, I was pretty surprised and excited that the bus company Flixbus is ESNcard partner, meaning a special discount for the card holders. Big up to ESN Germany’s Partnership manager!

In Jena, a pleasant surprise was waiting for me: as soon as stepped out of the bus, I saw Shari Eggers, who did her Erasmus exchange this autumn at Åbo Akademi, Turku, and attended NP Helsinki as well. She was also now a candidate for President of ESN Germany (and was elected, my biggest congratulations!).

Unfortunately, I was a bit late for the plenaries, so I missed the get-to-knows and country presentations (not the presentation of Finland, luckily). The presentations I managed to attend gave me an interesting view into another ESN country, their opinion on various issues and events, different points of view on the things that were already discussed in Finland. A good point about an NP is that it is a place for sharing your opinion freely, or according to some rules, but these rules do not restrict you too much. I was happy to listen to the discussions about Education Officer’s proposals, French-German section meeting, ESN Germany’s application for hosting AGM 2017 and of course to share knowledge about how things are going in Finland - for instance, talking about our partners, Pirates of the Baltic Sea and the #THISisFUNLAND t-shirts. There are no insignificant topics to discuss – it was proved by an ESNcard workshop, which lasted for an hour. We could’ve spent even more time talking, but the OC gently interrupted us, so we could go to dinner on time.

The best thing about our network is definitely the people! I met so many awesome people in Germany and I wish I could have spent more than two days with them. At the same time, I was pretty amazed to hear that about 15 out of 100 participants did their Erasmus in Finland, and I was pleased to see that they liked it, especially after they mentioned local ESN sections, without whom they wouldn’t have had that many awesome memories.

Unfortunately, all the ESN experiences come to an end at some point, and so did NP Jena. I’m so grateful to all the people who made this event happen, all the awesome people that attended and of course our lovely ESN Finland NB for funding this trip and letting me present the best things about our favourite Funland!

Love and kisses from Lappeenranta,


ESN Lappeenranta is one of ESN Finland's 16 sections. See more on their website.